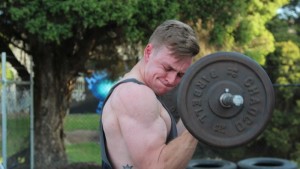 Bryce’s alarm goes off at 4:40am. His gym clothes are already laid out – the daily routine is set: a workout, followed by the first of his six meals – carefully weighed and packaged, to be eaten at exact intervals through the day. After work, it’s back to the gym. He’s in bed early – ready to repeat the process the next day, and every day.

This gruelling regime has transformed Bryce from a self described runt to a physique competitor with a supplements sponsorship, on the brink of starting steroids. He documents his “transformation” on Instagram – tan soaked abs, food prep and dozens of photos in front of the mirror, phone in hand, flexing and smiling through gritted teeth.

Every day you just wake up and want to be that little better, little bit bigger, little bit more cut,” he says ahead of the TV special Hack Live on Body Obsession.

“The day you started lifting is the day you became forever small”
Bryce is not alone – Australians spend a massive $8.5 billion each year on gym memberships, sports equipment and the latest fitness trends. About a thousand new gyms – mostly cheap, 24 hour operations – have opened in the past 5 years.

And while protein shakes, pre-workout pick-me-ups and creatine supplements used to belong to the world of bodybuilders, now everyday gym members are getting onboard. According to market research company Euromonitor International, Australians will spend $860 million on sports nutrition products this year.

Muscle dysmorphia researcher Scott Griffiths says the names of some supplements – including “Anabolic Injection” and “Testosteroid” – are deliberately designed to blur the lines with steroids.

“You’d be naive if you think the marketers aren’t mimicking the extreme efficacy of steroids,” he says.

He suggests supplements can become like a gateway drug for anabolic steroids – synthetic variants of the male sex hormone testosterone. While anabolic steroids have therapeutic purposes, they’re also used illegally to enhance muscle size and performance.

“The pathway to steroid use for a lot of guys starts off with protein powder here, maybe they put some creatine with it, maybe then they think ‘God it’d be good to try testosterone booster’…

That familiarisation with using powders and pills to achieve your goals makes it more comfortable for you to eventually use steroids.”
According to the Australian Crime Commission’s 2012-2013 Illicit Drug Data Report, the number of performance and image enhancing drugs detected at the Australian border has increased a staggering 750 per cent over the past decade. The number of steroid seizures and arrests has also continued to increase nationally and is at its highest number on record.

In a 2013 University of Sydney survey of 127 amateur bodybuilders, close to 50 per cent admitted to using anabolic steroids.

He says even in so-called natural associations, many competitors will run the risk of using steroids by hoping their random drug check comes at the right time.

Dr Hackett agrees that steroids are making their way out of the realms of high pressure competitions and into local gyms.

There is a strong culture towards the use of anabolic steroids. When you go down to your local gym you’d be quite blind if you’d didn’t see that there are people that look a little bit unnatural.”
Often sourced on the black market, the quality and strength of anabolic steroids can be questionable.

“I couldn’t breathe, I kept coughing – it was like a whooping cough almost – and then after four hours I went to stand up, got lightheaded, coughed, passed out on the floor.

“There was fluid in the bottom of my lungs so for four days I had to make sure the fluid was out because I couldn’t get a proper breath in,” he says.

The health risks don’t stop there. According to Dr Daniel Hackett, about 25 per cent of users will become addicted. There are documented links between the use of steroids and complications with the heart, liver and kidneys.

The body will try to adapt to the increased testosterone by scaling back its natural production, leading to testicular atrophy, or shrunken balls.

“Over time the body will get used to having something injected or orally taken to increase the levels of hormones. Your body will stop producing it normally,” says Dr Hackett.

“It is one of those cracker joke kind of things that the bigger the guy, the smaller his balls are,” says Clay.

If you’ve already got a small set they probably would get down to the size of grapes, maybe even raisins if you’re unfortunate.”
There’s also the much contested link between rage and steroids – or ‘roid rage’. While the science doesn’t tell us steroids cause anger – researchers say there appears to be a link.

Dr Hackett says it’s not known if that’s just because people likely to use steroids may be more likely to lose their temper already.

Clay says he’s felt ‘roid rage’ – just once. After an altercation in traffic he got out of his car and started a fight with someone he says was driving dangerously.

After it was over, he was so stunned by his own behaviour, which he says was completely out of character, that he called the police to tell them what he had done.

He’s also felt another much documented side effect – depression.

“I had a bad break up with a partner… it was a combination of a really, really f***ed up situation that happened and on top of that the only reason I felt as bad as I did was steroid related,” he says.

It’s like playing Russian roulette.”
The health risks weighed heavily on Bryce’s mind as he considered whether to pursue his first ever steroid cycle. He manages his depression with medication but it still overwhelms him at times and he knows steroids can make it worse.

He’s hesitant to get professional advice, because he doesn’t want to follow it.

“I have thought about seeing a counsellor and a doctor before I start steroids but I know the last time I went in for a checkup at the doctor I wanted to talk to him about my medication… and he gave me the talk on how bad steroids are for you… particularly for mental health.

“That doesn’t encourage me to go and seek professional advice because they’re going to turn around and say no – straight out – and that’s not the answer you’re looking for… I can’t deal with just a no,” he says.

He hopes that in becoming bigger, he’ll be happier and the immense sacrifice will be worth it.

“It looks like I’m becoming more desperate to be bigger. I’m getting to that stage where I’d almost do anything. I already do so much and there’s still the need to get bigger.”

It’s a sentiment he shares. For Bryce, the goalposts keep shifting. There doesn’t seem to be such a thing as ‘big enough’.

Clinical psychologist Dr Ben Buchanan says 50 per cent of weight lifters have some sort of body image problem, and around 17 per cent are at risk of having muscle dysmorphia – a form of body disorder related to obsessing over muscle size.

Bryce has spent a lot of time wondering if he might have it, given he’s willing to put so much on the line in order to achieve his ideal body.

“The battle between mental health versus physical health is so blurred for me most of the time. It’s gone from a healthy lifestyle to one where I’m really fit but it’s not healthy. My lifestyle isn’t healthy. It was,” he says.

“I’ve struggled long enough with body image that now it’s like maybe it’s going to be worth it if I have the physical results I think I deserve.”