I publish scientific peer-reviewed research on the connection between brain function and behaviour, with a focus on body dysmorphic disorder. I have undertaken academic work at the Royal Children’s Hospital’s Murdoch Research Institute, Monash Alfred Psychiatry Research Centre and Monash University. Much of my work has been in collaboration with Professor Susan Rossell. Below are selected publications and posters. Click here to view my CV. 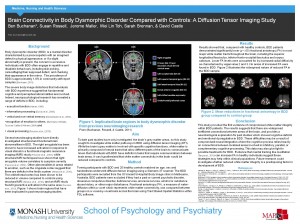 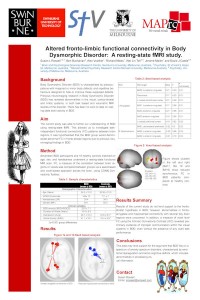 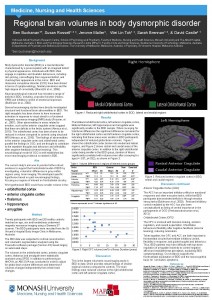 BACKGROUND: Several neuroimaging studies have investigated brain grey matter in people with body dysmorphic disorder (BDD), showing possible abnormalities in the limbic system, orbitofrontal cortex, caudate nuclei and temporal lobes. This study takes these findings forward by investigating white matter properties in BDD compared with controls using diffusion tensor imaging. It was hypothesized that the BDD sample would have widespread significantly reduced white matter connectivity as characterized by fractional anisotropy (FA).
METHOD: A total of 20 participants with BDD and 20 healthy controls matched on age, gender and handedness underwent diffusion tensor imaging. FA, a measure of water diffusion within a voxel, was compared between groups on a voxel-by-voxel basis across the brain using tract-based spatial statistics within the FSL package.
RESULTS: Results showed that, compared with healthy controls, BDD patients demonstrated significantly lower FA (p < 0.05) in most major white matter tracts throughout the brain, including in the superior longitudinal fasciculus, inferior fronto-occipital fasciculus and corpus callosum. Lower FA levels could be accounted for by increased radial diffusivity as characterized by eigenvalues 2 and 3. No area of higher FA was found in BDD.
CONCLUSIONS: This study provided the first evidence of compromised white matter integrity within BDD patients. This suggests that there are inefficient connections between different brain areas, which may explain the cognitive and emotion regulation deficits within BDD patients.
________________________________________________

An understanding of the neurocognitive and neurobiological underpinnings of body dysmorphic disorder (BDD) is important in differentiating BDD from related disorders, namely obsessive–compulsive disorder and psychotic disorders. Similar cognitive anomalies in executive function, spatial visual processing and memory (bias to process detailed visual information) have been found in BDD and obsessive–compulsive disorder samples, while schizophrenia patients display more pervasive cognitive deficits. Emotional hyperactivity and misinterpretation of emotion in others have been found in BDD, with similar results to obsessive–compulsive disorder samples. Neuroimaging has shown abnormalities in the prefrontal cortex, visual cortex, caudate nucleus and right amygdala in BDD patients. These findings are consistent with the neurocognitive profile. This field of research is in its infancy. However, the bias towards detailed visual analysis may be an important clue when investigating the neurobiological basis of BDD, and could explain why individuals exhibit focused attention on one aspect of their own appearance. Emotional hyperarousal caused by amygdala pathology may reinforce a perception of negative physical appearance.

Body dysmorphic disorder (BDD) is a mental disorder with five times the prevalence of anorexia, affecting up to 2.4% of the general population. The main symptom is a fixation on a feature of appearance that they attest looks ugly and they may engage in repetitive and ritualistic behaviour, including picking of their skin or checking their appearance in the mirror very frequently. The concern with appearance and associated behaviours are analogous to the obsessions and compulsions experienced in obsessive compulsive disorder (OCD). This thesis aimed to characterise the brain structure and circuitry of BDD to understand the mechanism that underlie the disorder’s onset and maintenance. We acquired the largest BDD neuroimaging sample to date, scanning 20 BDD participants and compared them to 20 healthy controls. Three imaging techniques were reported; structural magnetic resonance imaging (MRI), diffusion tensor imaging (DTI) and resting state functional MRI. The structural data showed reduced volumes in the orbitofrontal and anterior cingulate cortex, while the DTI data revealed for the first time that BDD patients have compromised integrity of most major white matter tracts throughout the brain. Resting state functional MRI showed abnormalities in fronto-amygdala and occipital lobe connectivity. Collectively, our evidence contributed rich data showing widespread abnormalities in the brains of BDD participants. These abnormalities may be the foundation for BDD symptoms, including increased fearful threat perception, and dysfunction in self-reflection, executive function and visual processing. It was concluded that the frontal and fronto-amygdala deficits found in BDD are important to the disorder, and suggest it lies on a spectrum of anxiety disorders characterized by emotional dysregulation.