How to bounce back from failure

Home/Uncategorized/How to bounce back from failure
Previous Next

How to bounce back from failure

This article was written by Paul Taylor and published by News.com.au. Full article available here. 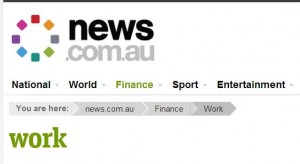 DON’T panic! From getting fired to getting knocked back for a date, everyone makes mistakes, but its what you do in the aftermath that makes you stronger and smarter.

It starts with that freezing sensation that rolls up the back of your neck, through your jaw and into your brain. You’ve made what feels like a catastrophic decision and now your entire body is emotionally paralysed.

Don’t panic: everyone makes mistakes, but it’s what you do in the aftermath that makes you stronger and smarter. When it feels like the walls of your life have collapsed in on themselves you need to rebuild — and that’s where we come in.

Here are five scenarios we hope you never have to face, from being rejected for a date to facing bankruptcy, all loaded with advice to get you back on the road to success.

“There’s one tip I’ve learnt for when you’re feeling down: stand up straight, put your shoulders back, look up and breathe in deep,” advises life — and date — coach Drew Wade. “Now try to be depressed. There’s something about that physical posture that does not allow you to be depressed.”

With excellent posture and a lung full of oxygen, here’s what to do when you:

1- Are fired from your job

Losing your job due to your company going under is one thing, but being fired because you (and you alone) made an absolute blinding error is another.

“Given that men derive a great deal of personal identity from employment, being fired can lead to intense feelings of inferiority, shame and guilt,” says Dr Ben Buchanan, a psychologist from the Victorian Counselling & Psychology Service.

It’s likely you’ll go through the five stages of grief — denial and isolation, anger, bargaining, depression, then finally acceptance and hope — in the following days and weeks, and if so, it’s important not to get stuck on one of those first four stages.

Apart from denial, anger or depression being unhealthy, you need to accept that the mistake was your fault so you don’t torpedo your next job interview. Because it’s possible you’ll have to directly answer a question about why you left your last place of employment, the solution is to be direct.

“Approaching your job interview with honesty and even with a degree of vulnerability is advisable over a defensive stance,” recommends Buchanan. “You can’t be honest with other people if you have not first been honest with yourself, understanding your own personal or professional weaknesses.”

Maybe you broke a promise. Maybe you were meant to be best man at their wedding, or you said you’d help them move house — and you flat out forgot or got the date completely wrong. Your mate is justifiably angry and you don’t know what to do other than apologise.

“Take responsibility,” says Wade, and she advises that you acknowledge the mistake you’ve made in order to regain your mate’s trust.

“As soon as you realise you messed up, step one is acknowledging that you let them down,” she says, and this can be a simple phone call or text message.

Step two is saying the impact that your cock-up had on them — for example, ‘I wasn’t at your house when I said I would be, and you didn’t get my support’ — and on yourself. Tell your friend how you feel. Be honest: if you feel like a guilty arsehole, say it.

Step three is creating a plan so that it doesn’t happen again.

“Put a calendar appointment in your phone or write it in your diary. Or, don’t commit when you know you aren’t able to so you don’t let them down in the future,” recommends Wade.

Demonstrating how you’re going to be more reliable is important, otherwise ‘sorry’ and ‘it won’t happen again’ are just empty words. This way, you’ve shown you have planned intentions and actions.

From club level football to an Olympic event, being defeated and coming second after a long season of hard work and sacrifice may make starting again for the next competition or league seem impossible. You might feel completely destroyed if the last kick that you took in the final seconds could have secured the win.

Ferry Lee, sport psychologist at the NSW Institute of Sport, says you should talk to your teammates — and if they’re not encouraging then it might be time to find a new team.

“A good team will embrace the wins and losses together,” he says.”If you feel that it was you alone that lost the match, even though everyone else played their best, then it doesn’t reflect well on the team.”

Ferry says he encourages people to quit if they’re not enjoying what they’re doing.

“You have to think about what’s going to make you happy and you have to work toward it.”

Having a strong and positive network, whether that’s your team, your mates or your family, is essential to look at your successes in the game — as well as what’s next and how you’re going to get there.

“Do you sit and dwell and let this one moment destroy your life, or do you refocus?” asks Lee. “It’s a good idea to debrief, with yourself or friend or teammate and understand what actually happened, and then you can figure out the steps towards your next goal.”

Debt that spirals out of control isn’t only financially crippling, it’s emotionally sapping if you’re struggling to pay it off. While going bankrupt erases some debt it’s a serious life event with implications that involve losing control of your company (if you have one) and assets being sold to meet your debt.

You should get help early, and don’t get into more debt to get rid of the other companies you owe money to. There are a number of services available to help you with your money problems, including a free financial counselling hotline where you can speak to an independent counsellor by calling 1800 007 007.

However, going bankrupt to shake unsecured debts — such as a credit card, store card or insane mobile phone bill — isn’t a ‘get out of jail free’ card. Your bankrupt status will be on your credit report (the file that credit agencies, such as banks, use to determine if you will pay back a loan) for up to seven years.

5- Got knocked back on a date

‘No’ can shatter your confidence, especially if it’s come someone you’ve been eyeing off for a while or you’ve suffered rejection multiple times. Don’t fall into the trap of thinking you’re hopeless because that girl has returned your cocktail to the barman — instead you should take steps to meet someone in the same way you’d hunt for a job.

“You could think ‘I’m a failure, this isn’t going anywhere’ and that’s true for whether you’re hunting for a job or a partner and had little success,” says Wade. “The problem is that a negative mental state stops you from taking action. If you want a certain job you can’t wait for it to fall in your lap. If you want to be in a relationship, you can’t simply wait for the right person to come along, you need to get out there and meet people.”

What is key here is to go through the emotional side of your brain — the part that is feeling negative and take action to start socialising. According to Wade, as long as you’re getting out there you’re doing what people who are successful in life do: they acknowledge all the feelings of imminent failure and do it anyway.

This article originally appeared in AskMen.