Written by Kimberly Gillan, this article criticises trying to create an image of the ‘perfect’ female face.

A beauty retailer has surveyed men and women about female celebrities’ best facial features and morphed them into two images that apparently epitomise the perfect female face.

There are striking differences between what men and women said they liked, but both sexes agreed actress Mila Kunis’s eyes were ideal, according to retailer escentual.com. 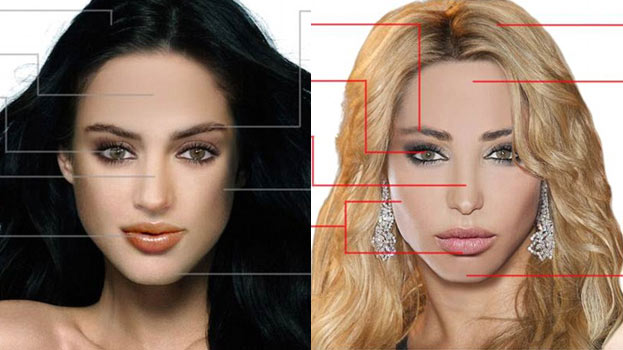 But the images — which have been crudely composited in Photoshop — have come under fire from body image experts who say focusing on female beauty is perpetuating body satisfaction issues for women.

Psychologist Dr Ben Buchanan, who is affiliated with Monash University and the Victorian Counselling and Psychological Services, said the 20 percent of women who engage in comparative thinking after being exposed to unrealistic ideals of beauty are likely to be affected by the image.

“What is more worrying to me is the two percent of the population who have body dysmorphic disorder who can see these things and think about it for up to eight hours a day,” he said.

“It’s not unusual for people with body dysmorphic disorder to overlay their own image onto this ideal beauty.”

In extreme cases, Dr Buchanan said these kinds of images can drive women to cosmetic surgeons to try and make their faces consistent with what is perceived to be perfect.

“It concerns me that without a proper psychological assessment from the cosmetic surgeon, they might go ahead and then become dissatisfied and distressed,” he said.

“No matter how much people with body dysmorphic disorder change their appearance, their shift in worry will always move onto another part of the body.”

Dr Buchanan said beauty companies have been producing such images for years, but that they constantly change as societal ideals of beauty shift.

“No matter how much we try to create one or two faces that represent ideal beauty, it is impossible,” Dr Buchanan said.