This article was written by Anne Lu and published in International Business Times. Full article here. 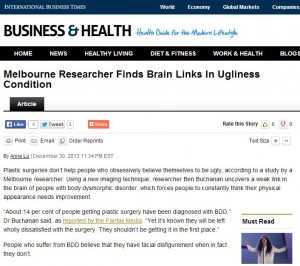 Plastic surgeries don’t help people who obsessively believe themselves to be ugly, according to a study by a Melbourne researcher. Using a new imaging technique, researcher Ben Buchanan uncovers a weak link in the brain of people with body dysmorphic disorder, which forces people to constantly think their physical appearance needs improvement.

“About 14 per cent of people getting plastic surgery have been diagnosed with BDD,” Dr Buchanan said, as reported by the Fairfax Media. “Yet it’s known they will be left wholly dissatisfied with the surgery. They shouldn’t be getting it in the first place.”

People who suffer from BDD believe that they have facial disfigurement when in fact they don’t.

Dr Buchanan’s finding was published in the Psychological Medicine journal in December.

BDD is a destructive psychological disorder, and is five times more prevalent than anorexia. The true number of sufferers seeking “unnecessary surgery” is not known as sufferers usually don’t talk about their feelings.

“They don’t want to talk to anyone about their feelings. They see themselves as unbearably ugly or disfigured and they’re too embarrassed to talk about it,” Dr Buchanan explained.

His research, which involved 40 patients referred by specialists, used an MRI machine and a new neuroimaging technique called diffusion tensor imaging. It found out that there was a weak connection between the amygdale and the orbitofrontal cortex.

The amygdale is the emotional centre of the brain, while the orbitofrontal cortex is the rational part that helps regulate emotional arousal.

He continued, “When BDD sufferers become emotionally distressed about their looks, they find it very difficult to wind down because the emotional and rational parts of their brain aren’t communicating effectively.”

Dr Buchanan said cosmetic surgeons should refuse procedures for patients with BDD because the patients won’t be satisfied with the results anyway.

BDD sufferers would be “highly resistant” to a surgeon saying no to their demands to undergo a procedure, and this trait should be treated as a “red flag” that a patient suffers from BDD.

Dr Buchanan conducted his research at the Monash University in Melbourne as a PhD candidate.